Every so often someone shares with us just how much the sound of the Mighty Wurlitzer means to them. Take a look at a wonderful letter we recently received:

Two years ago I attended a conference at Purdue University. My dad, Jack Byers, had attended there for 1 1/2 years before getting called to serve in WWII. He returned in 1946 to finish his degree in Engineering. He want on to work as a design engineer for Pontiac Division of GM and retired after 33 years.

Growing up, he loved theatre organs and took us many times to Detroit TOS for concerts as well as live accompaniment to silent films. He studied organs and helped repair a few when he could. He used this knowledge to eventually buy and install a pipe organ in his church in Clarkston, MI (Methodist Church).

At the Purdue conference in May 2015 I skipped a late session and took a slightly different route back to my hotel. I passed a truck on the street and noted that it said, “Organ Repair.” A few feet later I stopped and took a second look, then looked up at the building it was parked in front of. “No kidding,” I thought to myself. “I wonder if this repair man is working on a theatre organ?” So I took a chance and pulled on the door handle and to my amazement, it was open! So I came inside and was greeted in the lobby by a young gentleman who was kind enough to start showing me around. He offered to start up the organ (if the repair man was finished) and after several minutes of warm-up, I heard the glorious sounds that I knew so well. This was where my dad stood so many years ago, and I felt his smile from heaven. Thank you for the thrill and a memory of a lifetime. 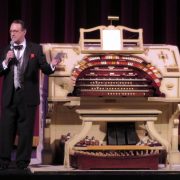